Gerry had lots of John moments.   Posted cards to relations, Mary and Jean, then the sun came out.   Wind in our faces all the way back.   Rescued sheep stuck in fence at Canisby.   Bought and ate Orkney fudge.   Hard but good ride back on NCN1, lunch stop at Castlehill Harbour in the sunshine. 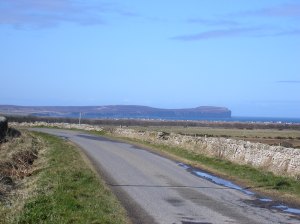 As soon as we left John O’Groats the sun arrived … thanks ‘John’! 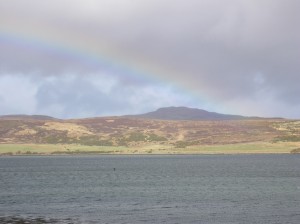 S.Y.H.A Hostel at Tongue – home for a couple of days…

Very windy again – still in Tongue but took a luggage free trip to village (4kms)  WiFi in hotel and beer.   Afternoon nap.   Kristin asked us to move rooms – helped prepare our old room.   10 people in tonight.   Motorcyclist took trip out and back.   Couple bus travelling from Brottie Ferry, 3 girls in a car and another couple. .   Prunes and custard and steak and kidney pie!!
Found good cheese “crowdie”.
Poem on the packing:
From far and away they came.
They travelled at night, battling through wind and rain
Wary of the moonlight,
Foregoing the highways.
Their road was never easy, but they came with glee.
Their gait told its own story
Why were they here, those small, grey but happy creatures?