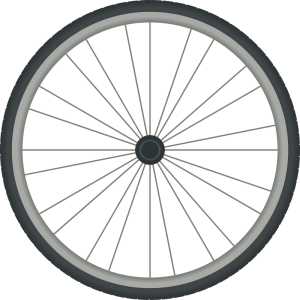 Sometime ago we thought about tracing the routes of two of the main rivers close to home, the Sees and the Selune, both of which empty into the Baie de Mont-St.-Michel.   Deciding to try young Harris in kennels for the first time, this was a better time-scale option than doing the Veloscenie to Paris, another “must-do” destination. 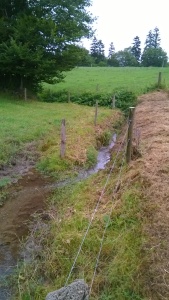 21st June 2015   – Midsummer’s Day, we set off on the Thorn tandem around    10am in mizzly rain with northwest winds.   We reached the sources of the Rousse and Blanc Sees by 11:30 (22 km) and we headed on the undulating road (plenty of low ring work) to Sourdeval – we always seem to arrive at 12:00 when we cycle to Sourdeval!

Break here for drinks and a snack overlooking the fountain outside the Hotel de Ville (not quite Versailles!)

Our route crossed the Mortain – Vire Voie-Verte just outside Sourdeval

With the river Sees to the south, our route continued up and down through the valley, the wind persisted, the river now ran to the north; and our route ran beneath an avenue of lime trees towards the interesting little church at Les Cresnays.

After a while we turned north and crossed the river to head into Brecey, where Enduro Horse Trials were being held.   Here a roughish side road eventually gave way to Rue de St.Brice, with striking views of the horseshoe bends in the river as we came towards Ponts and Avranches.   Route de les Greves took us through the industrial area to the shore overlooking the Hippodrome at Vains across the estuary where racing was in progress – needed very good binoculars!

Last bridge over the SEES before it enters the Baie

( 70 km travelled to this point).   Here the estuary of the Sees was carrying the Avranches Canoe Club out to the sea between the mudflats with Mont-St-Michel in the distance.

We continued around the Baie and joined the mouth of the Selune at Pontabault bridge. Here there was a quick picnic on the green beneath the railway bridge, whilst we booked a hotel at Bas Courtils (Relais de la Hardiesse). After another 7 km we arrived to a comfortable room with a really good shower. Unfortunately no lock-up for the bike but it was safely hidden  behind the owner’s car.   No evening meals but we were directed to Le Manoir which we had paused at 500m back when adjusting a luggage strap. Here we  enjoyed an excellent meal (15,90 euros) of pres-salee lamb cooked in local beer followed by crepes. The local beer was from the Brasserie de la Baie , which was within sight of our bedroom window, so couldn’t get much more local and, of course, was also sampled.

Le Cousenon on it’s way to the sea…

de Mont-St.Michel for the day and spend the night near Pontabault (la bouche de la Selune) allowing us to include a third river, le Cousenon, which also empties into the Baie.   The new Mont-St-Michel road, D275, massively revamped since the changes to the Mont’s access, took us there in 11 km – wind was less but rain threatened again.   To cycle to the barrage, it does seem best to join the cycle path at Beauvoir; thus enjoying the stunning approach to the Mont.   Coffee was taken next to the bike stands near the barrage, not too sure about security and not good for a tandem!   There is now limited access on to the passerelle, even for bikes.

There was still a cuckoo to be heard near Moidrey by the river – obviously thinking summer was still to come – it was mizzling again. Heading towards Tanis and Servon on the way back to Pontabault, there was an excellent view from the Calvaire across the countryside to Mont-St.-Michel, great in Summer, but must be exceptional in Winter when the trees are bare. Here we were reminded: “Notre Dame de la route, guide nos pas”!

After another photocall coming down into Pontabault which gave a view of our first two rivers’ estuaries, we joined the Voie Verte and our route following the Selune back to source near St. Cyr du Bailleul.   As home was only 43 km away, another Hotel seemed unnecessary, so enjoyed the Voie Verte to Ducey where we shared experiences with two ladies who were following the Veloscenie from Paris to Mont-St.-Michel.   We ducked off the Voie Verte to follow the river more closely via the barrage at Vezins – much controversy still about its status.   The rain started to increase as did the hills as we pushed on through Vezins, Les Briards and Virey. We re-affirmed the problem with Mondays in this area – cafes and a lot of shops are closed, we had looked forward to rediscovering the cafe in Virey, perhaps we should have stopped another night?   Now thoroughly soaked, we pedalled into St. Hilaire-du-Harcouet and dripped around Leclerc for “supper” supplies, before following the Selune valley home.

The source of the Selune is actually just above St.Cyr du Bailleul (found on a previous ride) and is only 14 km away from home, forgive us for not going the full distance in these conditions, but we decided the mission had been accomplished!

Our route crossed the Mortain – Vire Voie-Verte just outside Sourdeval 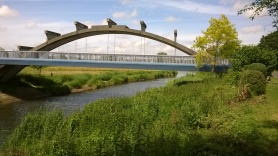 Last bridge over the SEES before it enters the Baie 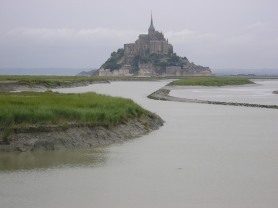 Le Cousenon on it’s way to the sea… 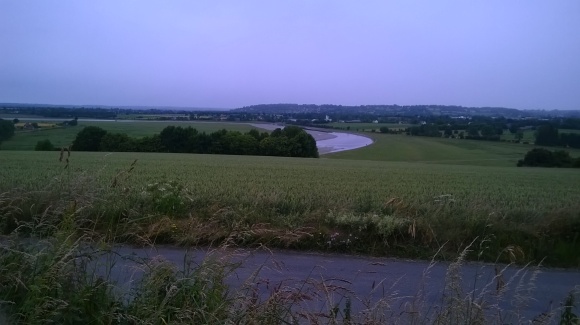 This site uses Akismet to reduce spam. Learn how your comment data is processed.

Riding the Veloscenic from Paris to Mont St. Michel.